The inbreeding calculation has been enhanced in two key areas. Firstly, from looking at a lot of the data that is out there its not unusual to see "self parenting" type errors in a database. These can be particularly difficult to detect because it can occur after say 40 generations. To solve this problem the Inbreeding Calculation function will automatically check for self parenting errors with the number of generations specified by the user.

The second big change is that IC now has its own grid for displaying results as shown below: The grid displays:

Toolbar buttons provide the ability to sort on any of the fields making it easy to see which ancestors have the greatest influence (COR) or occur the most times. There's also a copy button for copying the grid contents to other applications like Excel. 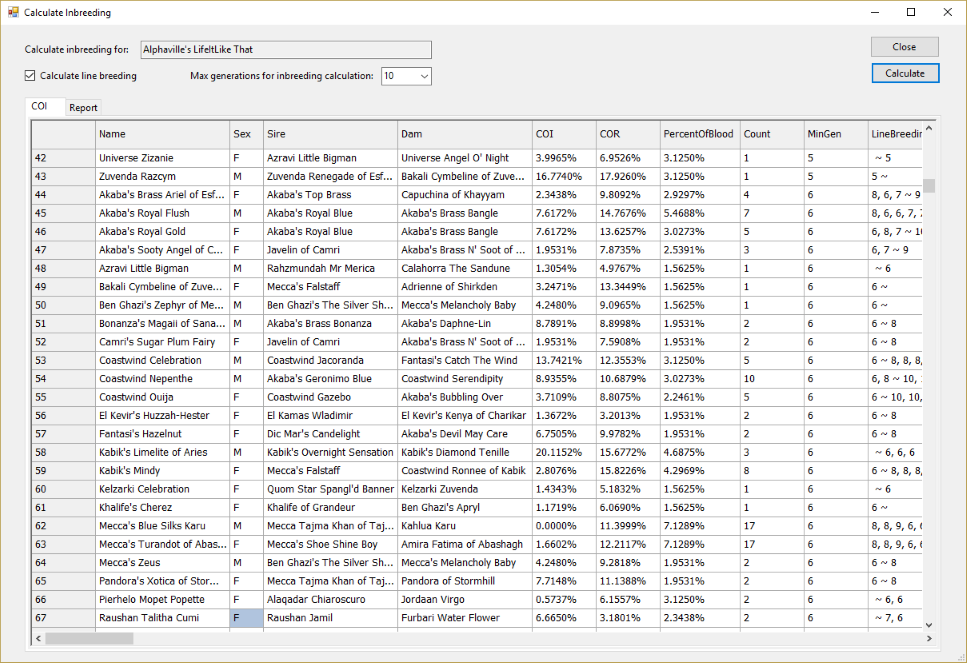 We also have a Breed Planner which provides two side-by-side tables as above and also allows printing.

We get a lot of queries about inbreeding coefficient and to a lesser extent the relationship coefficient. BreedMate calculates the Wrights Inbreeding Coefficient.

Wright's Inbreeding Coefficient  (IC)
Inbreeding can be defined by either of the following two statements:

Note if you set the generations large enough the COI will be the same for both 4.6 and 5.1+.

Links
There are many articles relating to inbreeding coefficient on the internet. Note we do not necessarily approve or recommend any of the links listed: